Join us for another great Florida Carillon Festival performance in February celebrating Valentine’s Day and the greatest musical love stories. 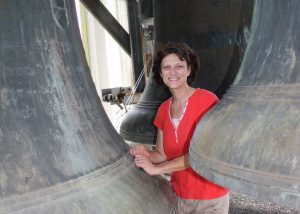 Lisa began her carillon studies as a teenager with Frank Law, carillonneur at the Washington Memorial National Carillon in Valley Forge, PA and continued with Frank DellaPenna, Mr. Law’s successor.
Known for her musical wit and creative programming, Ms. Lonie is a frequent recitalist throughout the U.S., Canada, and Europe. She has performed in internationally acclaimed carillon festivals, as well as for several national congresses of the GCNA, as guest carillonneur for the 2002 National Convention of the American Guild of Organists (AGO) in Philadelphia, and as an invited recitalist at the World Carillon Federation Congress in Aschaffenburg, Germany. She also is one of the featured performers on the CD recording, Princeton Carillon Class of 1892 and on the NBC television special “Ringing in the Holidays at Longwood Gardens.”
Lisa studied piano with Nancy Turner of Philadelphia and is a graduate of the Pennsylvania State University with dual degrees in German and Economics.

Ticket price includes general admission to the Gardens. Tickets are available for purchase at www.boktower.org, in person at the Visitor Center or by phone at 863-734-1222. All programs and classes promptly begin at stated time and visitors are encouraged to arrive at least 10 minutes before class begins for check-in. Check-in begins 30 minutes prior to the class start time. Culinary events are demonstration based and late arrivals may not be accommodated. For classes held after 5 pm, the entrance gate will stay open for an additional 30 minutes after the start time. Once the gate closes, late arrivals will not be admitted. Due to the nature of culinary events held at the Outdoor Kitchen, Bok Tower Garden may attempt, but cannot guarantee, to accommodate food allergies. Dogs are not permitted at any educational program.