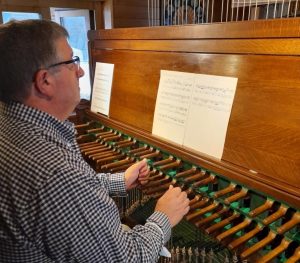 About the Carillonneur:
John Widmann is the City Carillonneur for the City of Frederick, Maryland, where he plays recitals every Sunday at 12:30, year round, on the Joseph Dill Baker Carillon in Baker Park. He has now held that position for thirty years. Mr. Widmann graduated from Indiana University of Pennsylvania, and completed in his Master of Music degree from Towson University in 2011. In 2021-2022, Mr. Widmann studied for his diploma at the Royal Carillon School “Jef Denyn” in Mechelen, Belgium. In addition to his Sunday recitals, he retired last year from Frederick County Public Schools where he was a General/Vocal Music teacher. He is also a freelance organist and conductor. Mr. Widmann became a Carillonneur member of the Guild of Carillonneurs in North America in 1996, and is a past member of the National Board of that organization. He maintains an active concert schedule, and has played frequently in the US, along with recitals in Belgium, France, Switzerland, Spain, Portugal, the Netherlands, Ireland, Canada, and the Netherlands Antilles. He lives in Frederick with his wife and sometimes their two grown children.

Ticket price includes general admission to the Gardens. Tickets are available for purchase at www.boktower.org, in person at the Visitor Center or by phone at 863-734-1222. All programs and classes promptly begin at stated time and visitors are encouraged to arrive at least 10 minutes before class begins for check-in. Check-in begins 30 minutes prior to the class start time. Culinary events are demonstration based and late arrivals may not be accommodated. For classes held after 5 pm, the entrance gate will stay open for an additional 30 minutes after the start time. Once the gate closes, late arrivals will not be admitted. Due to the nature of culinary events held at the Outdoor Kitchen, Bok Tower Garden may attempt, but cannot guarantee, to accommodate food allergies. Dogs are not permitted at any educational program.