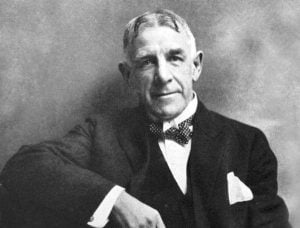 To inspire a better and more beautiful world by sharing Edward Bok’s legacy: “Wherever your lives may be cast, make the world a bit better or more beautiful because you have lived in it.”

Edward William Bok
(1863-1930), American editor and Pulitzer Prize-winning author, was born in Den Helder, Netherlands, on October 9, 1863. He came to the United States at the age of six. Educated in the Brooklyn Public Schools, he became an office boy with the Western Union Telegraph Company in 1876.

Continuing his education at a night school, he began working for Henry Holt and Company, publishers, in 1882. Two years later he became associated with Charles Scribner’s Sons, publishers, eventually becoming advertising manager. He was the editor of The Brooklyn Magazine from 1884 to 1887. In 1886, he founded The Bok Syndicate Press, which led to the offer of the editorship of The Ladies’ Home Journal in 1889.

Under his management, The Ladies’ Home Journal became one of the most successful and influential publications in America and the first magazine in the world to have one million subscribers. Bok was a champion of social causes, a pioneer in the field of public sex education, prenatal education and childcare, and an environmental activist in public health and the saving of Niagara Falls.

Bok also had a great influence on American architecture. He was a leader of the Arts and Crafts movement at the turn of the century and was the first to call Victorian parlors “living rooms.” Frank Lloyd Wright Jr. was one of the new architects Bok promoted by making his house plans available to the public in the Journal.

After 30 years as editor he retired in 1919. A year later he published The Americanization of Edward Bok, which won the Gold Medal of the Academy of Political and Social Science and the Joseph Pulitzer Prize for best autobiography.

In addition to his autobiography, Bok published the following:

On February 1, 1929, President Calvin Coolidge dedicated the Gardens in Lake Wales, Florida, that Bok had made as a gift for visitation by the American people in gratitude for the opportunity they had given him.

Edward William Bok died in Lake Wales within sight of his beloved Singing Tower on January 9, 1930, and is now buried at the base of the Tower.