See what's inside the Tower!
Select the part of the tower you'd like to know more about.

What is a Carillon?

A Carillon is an instrument of at least 23 tuned bells in chromatic series. Cast from bronze, which is composed mainly of copper and tin, and then specially tuned. The bells are “hung dead” meaning that the bells do not swing, only the clappers move. The instrument is fully mechanical (there are no electronics). The carillon art began in the low countries of Belgium and the Netherlands in the 17th century. Today, these countries still have the highest concentrations of carillons.

Fun Fact: There are approximately 600 carillons around the world and only about 185 carillons in North America. Imagine if there were only 185 pianos on the whole continent – and we’re lucky enough to have one here!

The carillon is played using a clavier (keyboard) that allows expressiveness through variation in touch, similar to a piano, using both the hands (in a lightly closed fist) and feet. The keyboard is connected through a series of wires and levers to each clapper which strikes inside of the bell, causing it to ring out. Bells cannot be silenced after they are rung. Most towers also have a practice keyboard, usually identical to the playing keyboard, which is connected to a set of xylophone bars, so that carillonneurs can practice privately, without being heard outside.

Learn more about the Carillonneurs of Bok Tower 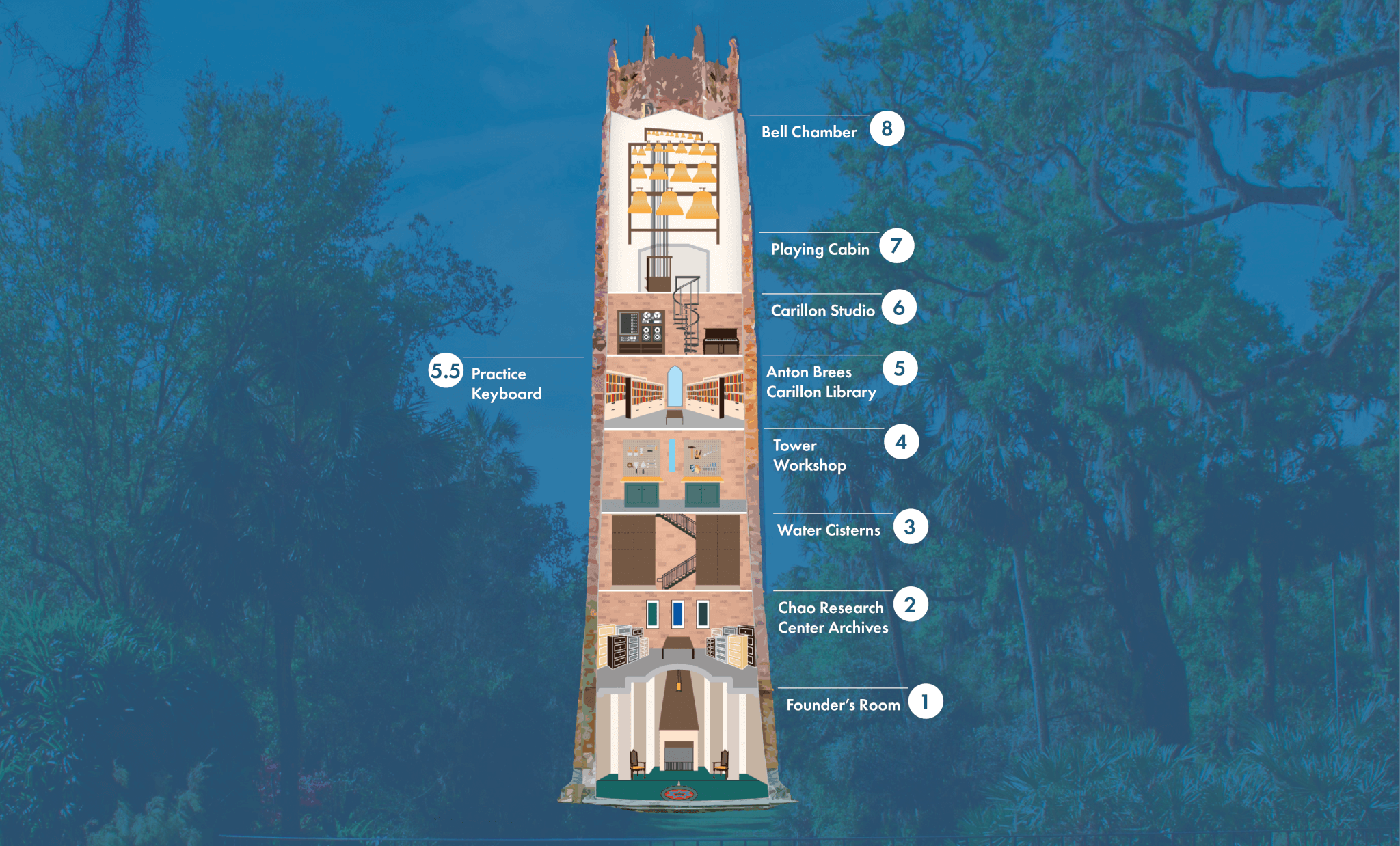 Although it was not always called as such, today we call the first level of the Tower the “Founder’s Room” in honor of Bok Tower Gardens’ founder, Edward Bok. The Founder’s Room floor features an elaborate tile floor created by Enfield Pottery & Tile Works, using the same bright colors of the tile grilles on the outside of the Tower. The design on the floor is called “Birth of Garden.” Its center medallion is a six-pointed star on top of a lotus blossom. The “tree of life”
then extends in four directions, and “water” runs around the outside. Throughout are animals of the land, sea, and air including: birds, turtles, deer, rabbits, fox, bison, and squirrels.

Fun fact: While designs throughout the Tower are inspired by the flora and fauna of Florida, the floor mistakenly includes Maine lobsters, which have claws, instead of the Florida spiny lobster, which do not. 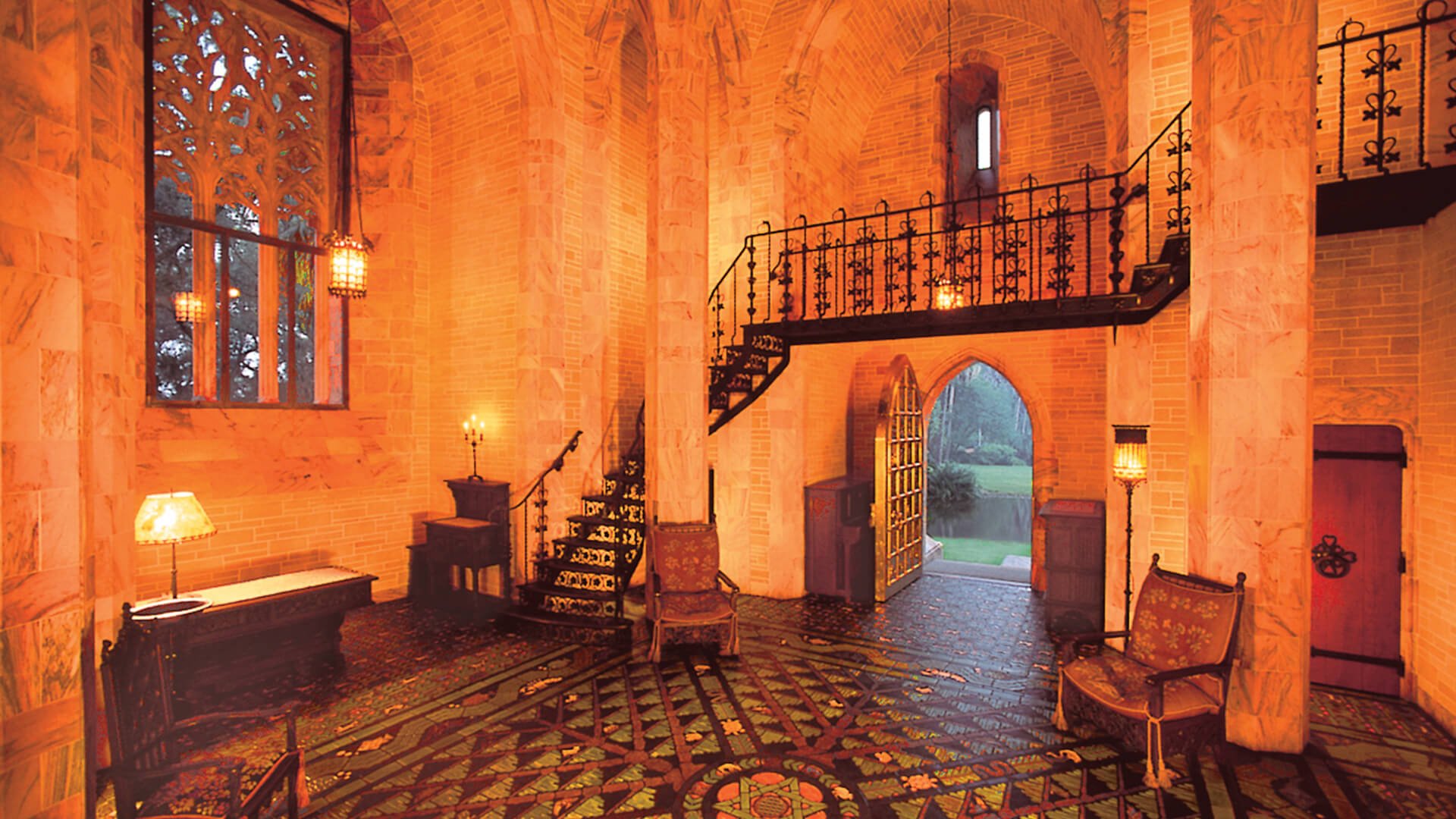 Built in 2008 thanks to the generosity of Ting Tsung & Wei Fong Chao Foundation, the Chao Research Center Archives holds the historical records of Bok Tower Gardens.

Collections in the archives include:
- Mr. Bok's scrapbooks
- Correspondence between Mr. Bok and Mr. Olmsted discussing the planning of the gardens
- Mr. Olmsted’s weekly progress reports, and other materials documenting construction of the gardens and the Singing Tower, including the Burrell Collection Documentation about the acquisition and management of Pinewood Estate
- Board minutes and other documentation from the American Foundation (today called the Bok Tower Gardens Foundation)
- Posters, press releases, news articles, and other public relations/marketing materials
- Grant documentation Note: some financial information may have restricted access
- Blueprints
- Visual materials including slides, photographs, and artwork
- Three-dimensional artifacts

The library and archives are open Monday-Friday, 9am-5pm for email at Library@boktower.org and phone 863-734-1227 for inquiries. In-person research is by appointment only. 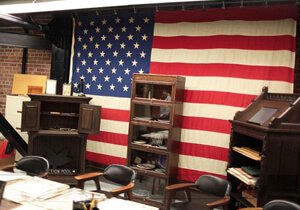 The third level of the Tower houses two 15,000 gallon water cisterns (total 30,000 gallons). These water tanks were installed during the construction of the tower, filled via water pumps which pumped water from nearby Mountain Lake (they did not collect rain water) and were used to water the gardens. Their use ceased in 1956 and today they are used for storage.

Fun Fact: We created a door in the side of each tank by torch cutting it open and adding hinges. 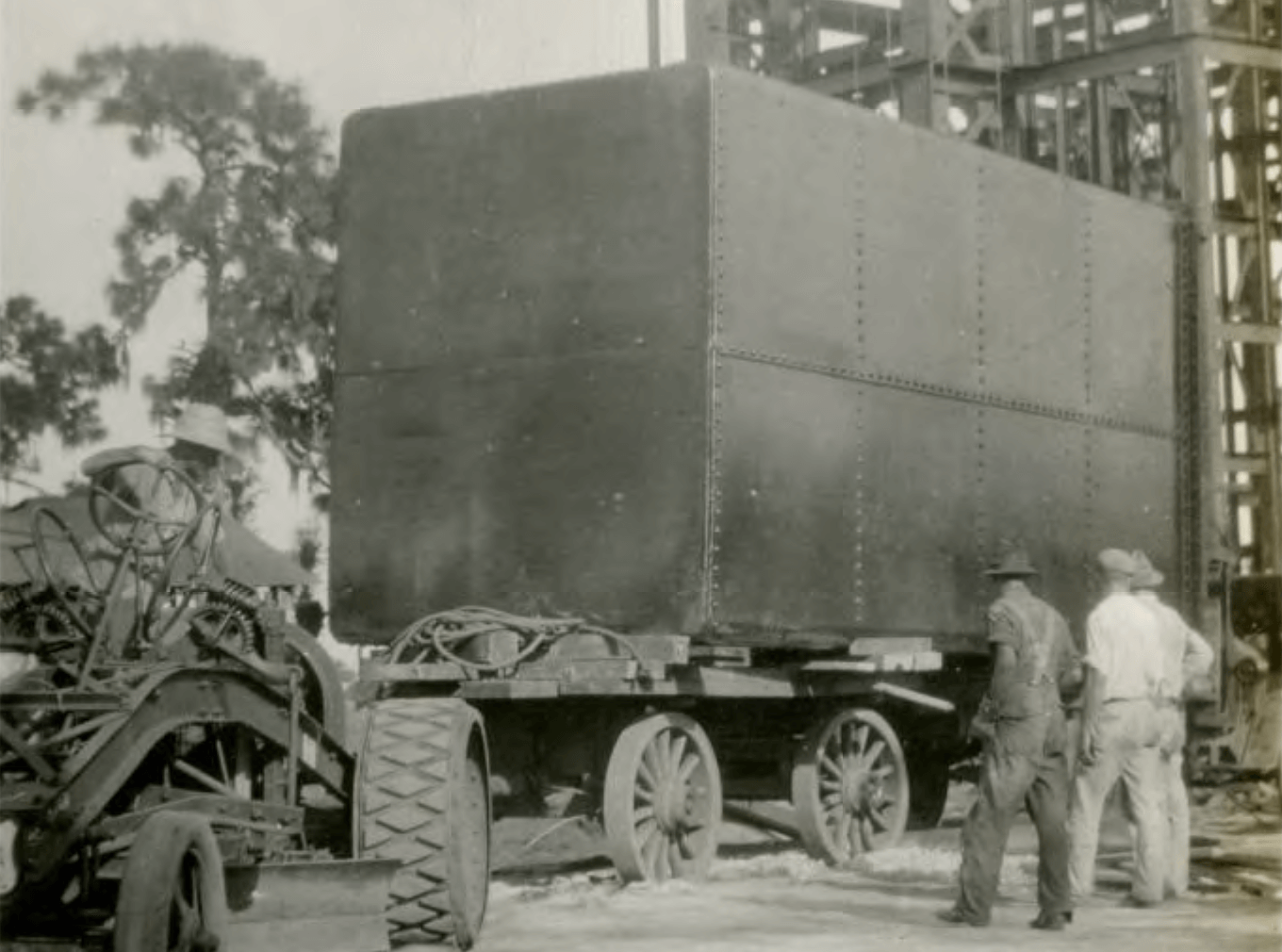 Our Facilities & Operations team use this workshop when working on projects within the Tower. Some of their tasks include polishing the Great Brass Door, maintaining the carillon, and servicing the elevator. The maintenance workshop was built in 1975 and is still in use today. It houses supplies and a small office for the tower maintenance technician (the position was formerly called tower curator). 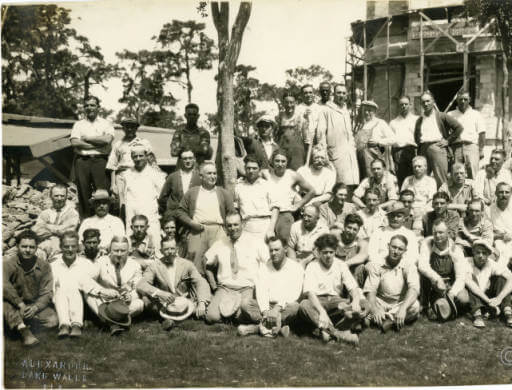 The Anton Brees Carillon Library was built in 1975, thanks to the generosity of Nellie Lee Bok. It is named after Bok Tower Gardens' first carillonneur, Anton Brees.

The library and archives are open Monday-Friday, 9am-5pm for email and phone inquiries. In-person research is by appointment only. Collections are searchable via two catalogs. The library catalog, which is searchable like the catalog for the public library, displays records of the books, scores, and recordings. The digital collections displays materials that have been digitized so that items, such as historic photographs, postcards, and letters, are viewable without needing to make a research appointment. 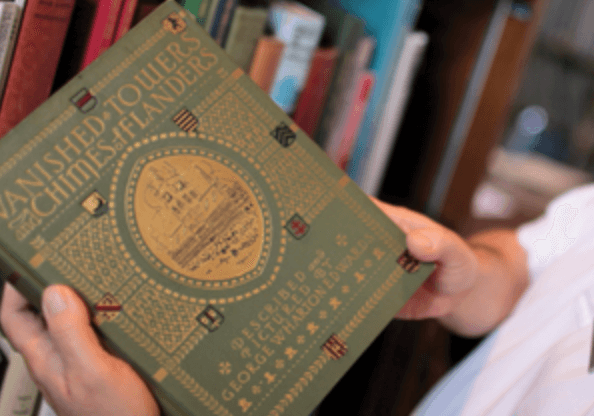 The studio is the workspace for the carillonneur and includes a desk and a piano. The Steinway piano was donated in 1928 by Josef Hofmann (director of the Curtis Institute of Music). The studio also houses recording and playback equipment. 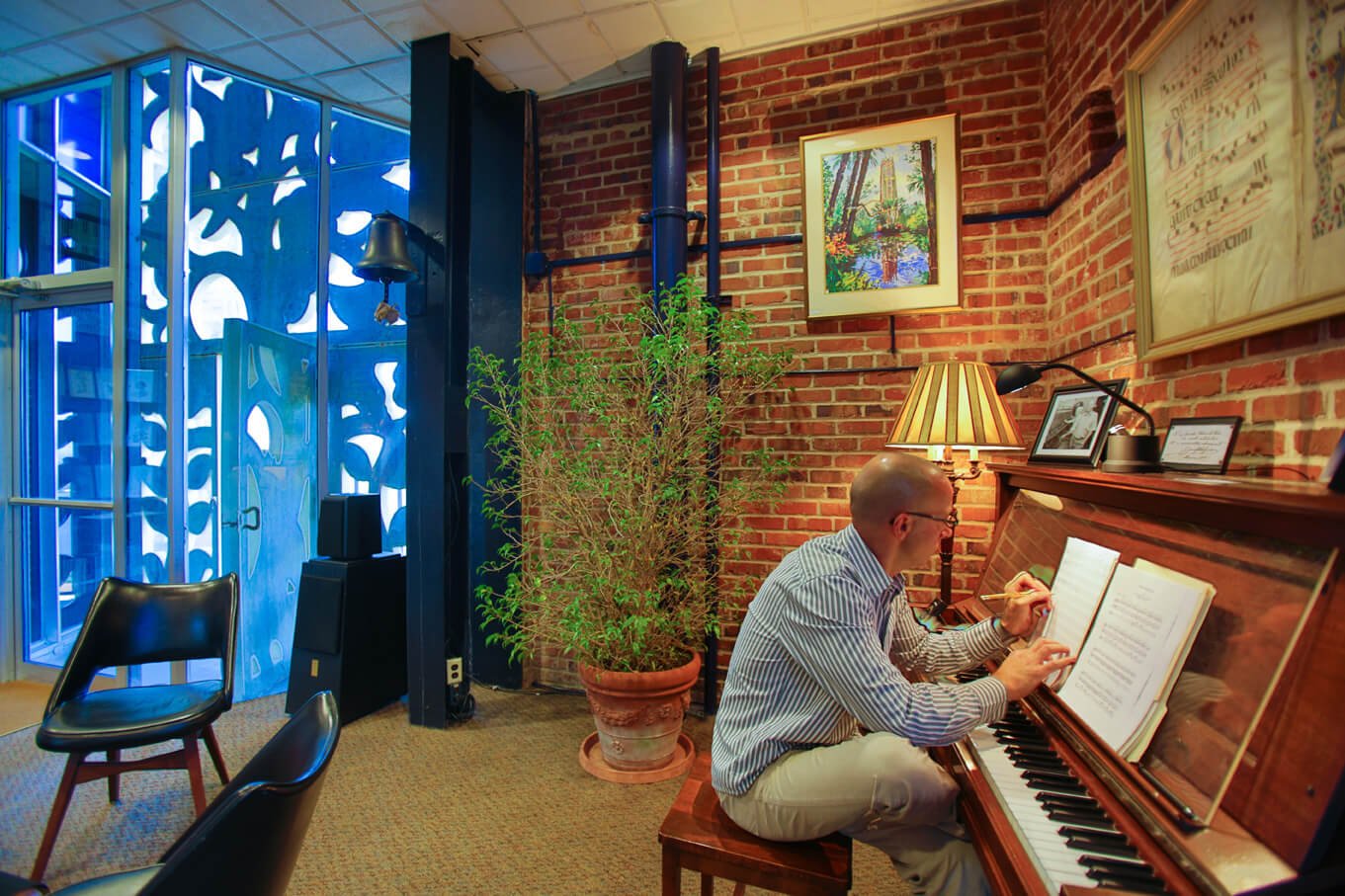 Level 7: Playing Cabin The playing cabin houses the keyboard from which the carillon is played. The octagonal-shaped cabin is sound proofed to protect the carillonneur’s hearing, being so near to the bells, however the outer door of the cabin is usually propped opened slightly so that the carillonneur can listen to their performance. A closed-circuit camera inside the cabins connected to a television in the gardens allows visitors to view the performer during live concerts. 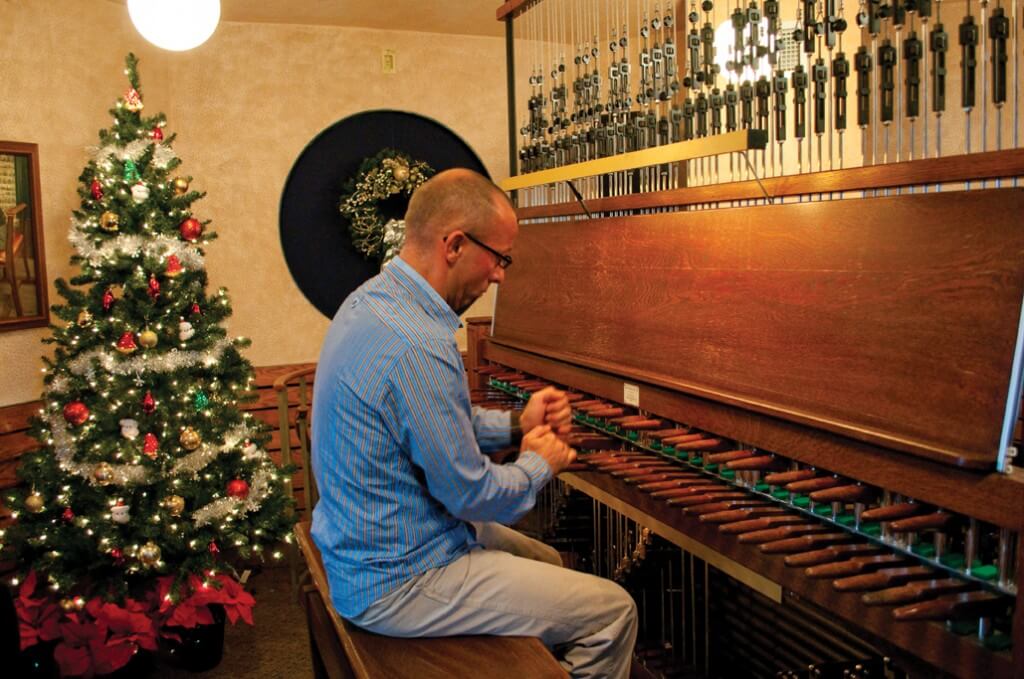 The bells of the carillon are housed in the bell chamber. Bok Tower's carillon is comprised of 60 bells, all of which were cast by the John Taylor Bell Foundry (Loughborough, England).

How are Carillon Bells Cast?

Bell casting is a very involved and technical process. An inner mold called a “core” is created using brick and a loam mixture (containing clay, manure, hay). The core is then dried over a fire. An outer mold called a “cope” is created, also using a loam mixture. Decorative elements, such as an inscription, date, maker’s mark, or other decoration, are added in reverse to the inside of the cope. The cope is also then dried over a fire.

Fun fact: Each core and cope is unique and cannot be reused The core and cope are sealed together for the casting, and buried in the ground, with just the top of the mold peering out.

The bell is cast by pouring molten bronze, sometimes fresh bronze and sometimes taken from old bells broken into pieces, into the mold. The molten bronze fills up the space between the core and the cope to create the bell.

After several days (or several weeks for larger bells), the metal will be cool enough to be dug up and the mold broken open to see if the casting has been successful.

The bell is then cleaned off and tuned. Bells are tuned by being placed upside down on a lathe, which turns slowly while metal from the inside of the bell is carefully shaved off until the bell is the correct pitch.

Properly tuned bells which are smaller will not need to be retuned for decades, while larger bells can be good for centuries. However, they are affected by air quality, weather, and use.